Learn Quartz Composer in One Weekend

Quartz composer (QC) is an interactive dataflow language from Apple (you need MacOS to run it).   I prototype many things in QC because it is very easy to do many things like test image processing functions by feeding the web cam into it.   Facebook prototypes their apps on a version of QC they have extended for their purposes.   Lots of people, including me, love it.   However, visual dataflow a pretty different way of programming and there are also conventions in QC that that are easy, but somebody needs to show them to you.    I spent about a week learning QC to the point where I could do something useful because I was a bit overwhelmed by all of the documentation out there.    However, key was I found an almost perfect set of youtube videos by Rob Duarte.     Go through these videos on Day 1, and be sure to follow each one and actually duplicate his compositions as you go.   On Day 2, do your own project.   I, for example, did face detection on the webcam and then added devil horns.   That was a really easy project in QC because there is a face detection module build in.
Posted by Peter Shirley at 2:49 PM 47 comments:

Ray Tracing: The Rest of Your Life 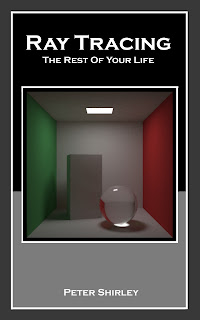 This page is for further reading and a page to comment on.   This book is for people who have already written a ray tracer as an entry portal into the world of graphics research.  So this book has a narrower audience than the previous two mini-books.   It covers a path tracer's probabilistic sampling in enough detail to get people up to speed to follow the literature and rendering trends.

Don Mitchell has a nice paper on how jittering changes convergence rates.

Chapter 11: The Rest of Your Life

Rendering is a mature enough field that there are several good book on it now.   First I would get yourself a copy of this book:
Physically Based Rendering, Third Edition: From Theory To Implementation

I used it as a text in my course instead of my own book.   It is that good!

This is another extremely good book on physically based rendering:
Advanced Global Illumination, Second Edition

This book is older, but it mostly covers topics that don't age and I would definitely get a copy.   It's treatment of the math topics useful in graphics are my favorite (for example the basis function discussion is amazing):  (update-- it is free online!)
Principles of Digital Image Synthesis (The Morgan Kaufmann Series in Computer Graphics) 2 Volume Set

You will want to start putting out high dynamic range images.   You are already computing them!  This book is a very good discussion of high dynamic range issues:
High Dynamic Range Imaging, Second Edition: Acquisition, Display, and Image-Based Lighting

This is another older book.   It's still got some gold in it, and if you're gonna stay in the area long-haul then I would buy it:
An Introduction to Ray Tracing (The Morgan Kaufmann Series in Computer Graphics)

Ray Tracing: the Next Week

There's been a lot of interest and positive feedback on my mini-book on ray tracing.

This page is for the sequel Ray Tracing: the Next Week

This page also gives links and pointers for each chapter.   The features covered are those in this picture: 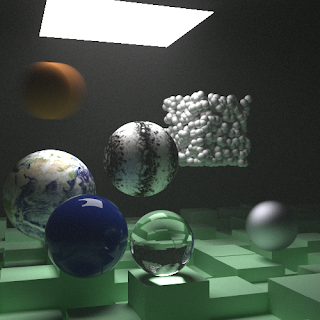 This method was introduced in 1984 by Rob Cook.


The construction method in the book can be improved by using the surface area heuristic (SAH).     When evaluating potential partitions, the one that minimized the surface area of the sum of volumes of the sub-trees is almost always good.  Here is a SAH-based build that cuts on the longest axis.

A fantastic tool explaining how it works by Andrew Kensler

The program in the book implicitly samples lights so there are no shadow rays.   If you want to get more efficient direct lighting you can either send shadow rays, or importance sample by sending more rays toward the lights.

A general instance usually stores transformation matrices.   Composite transforms can all be in one node.   When scales are allowed handling the surface normals must be done with care.

Here's a derivation of the ray-constant-medium intersection.

It is straightforward to add nonuniform densities by adding a more sophisticated intersection method.   This is covered in this blog post.   It's pretty common knowledge in the ray tracing community, but not really in the intersection. 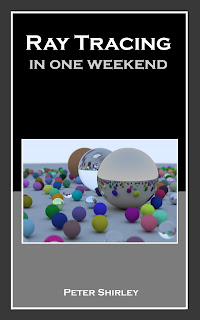 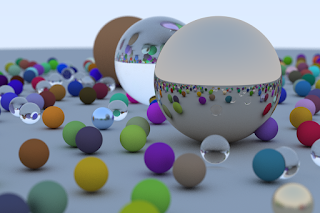